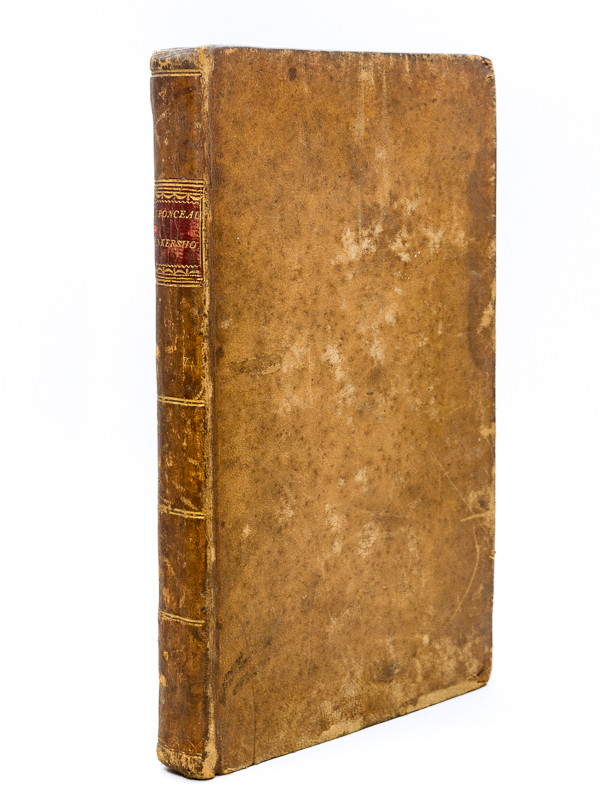 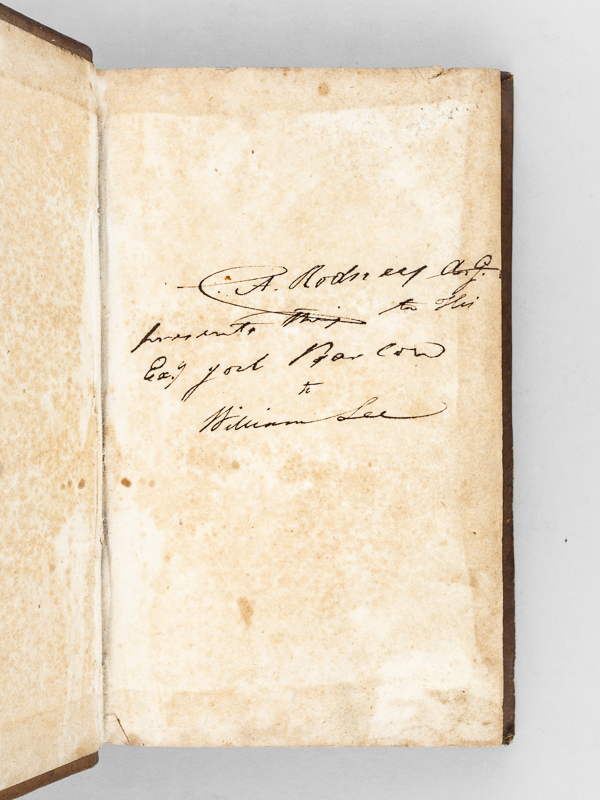 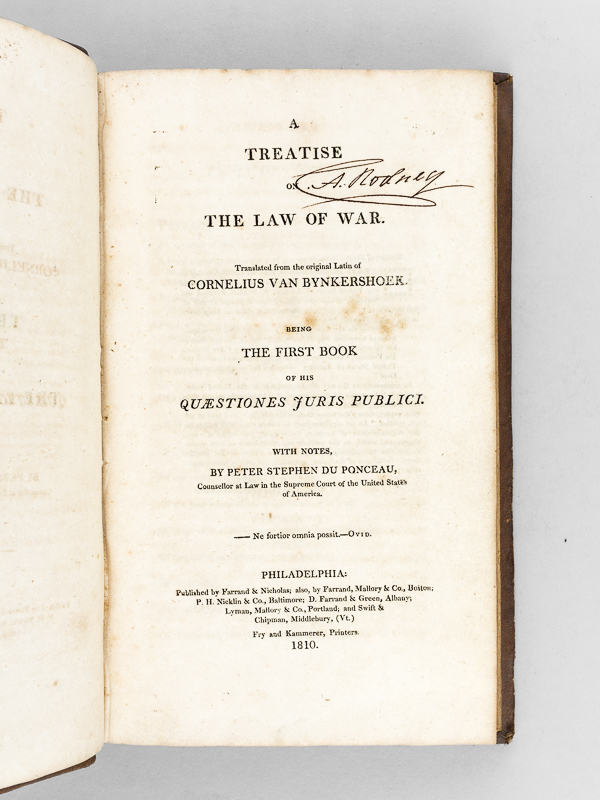 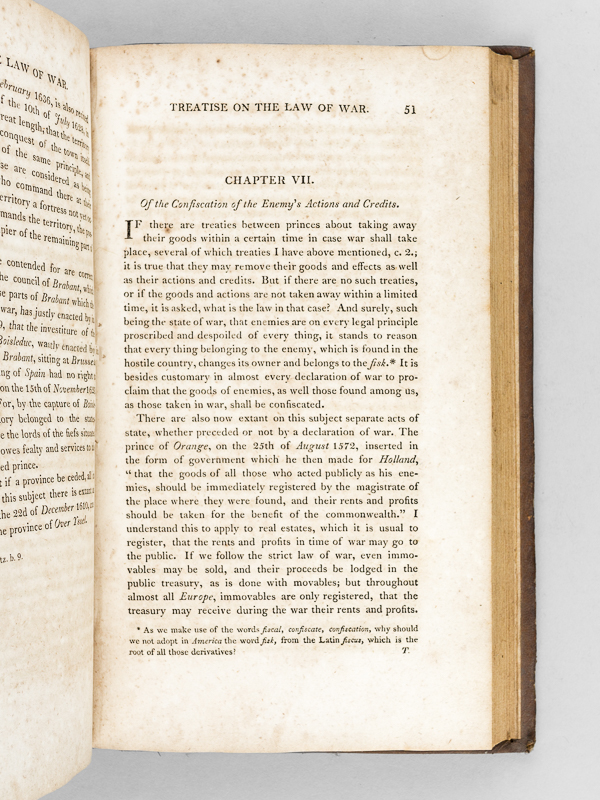 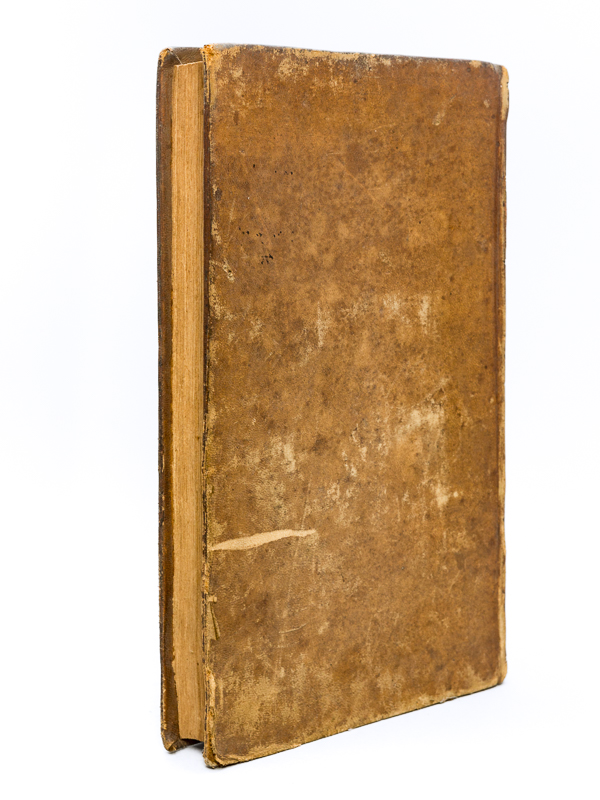 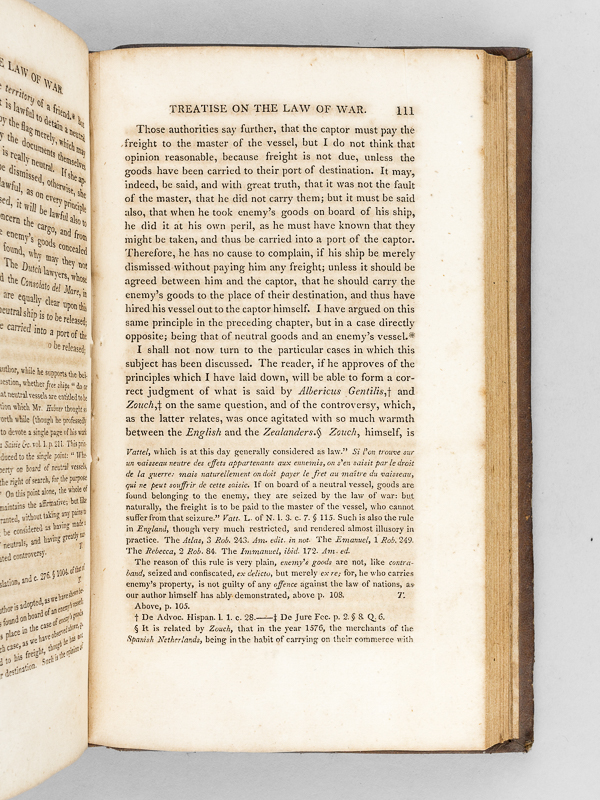 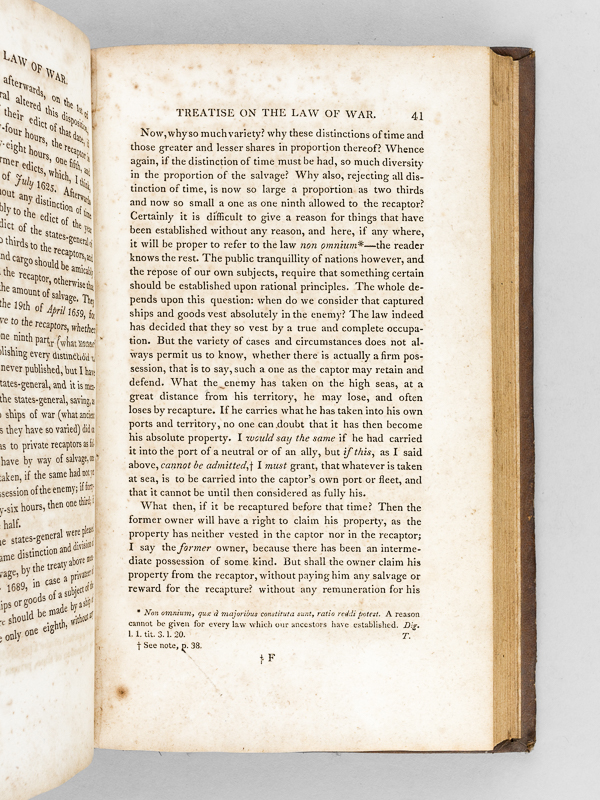 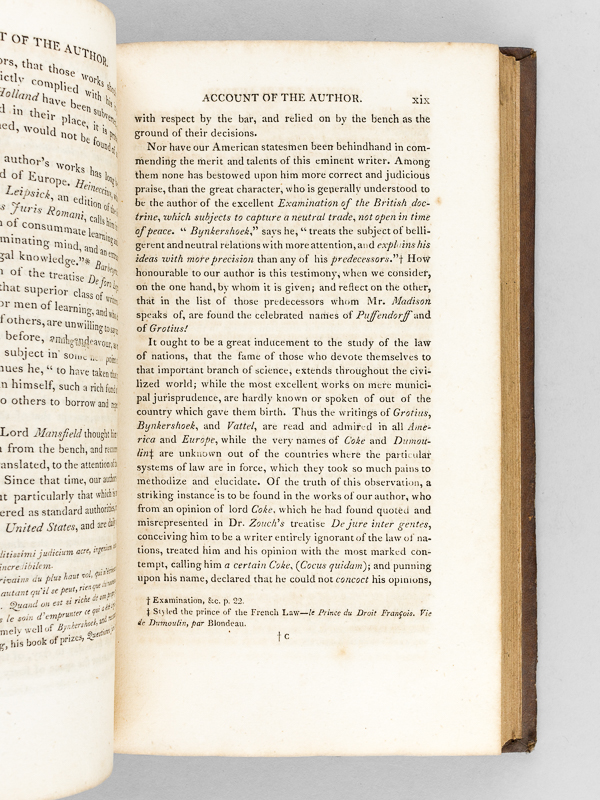 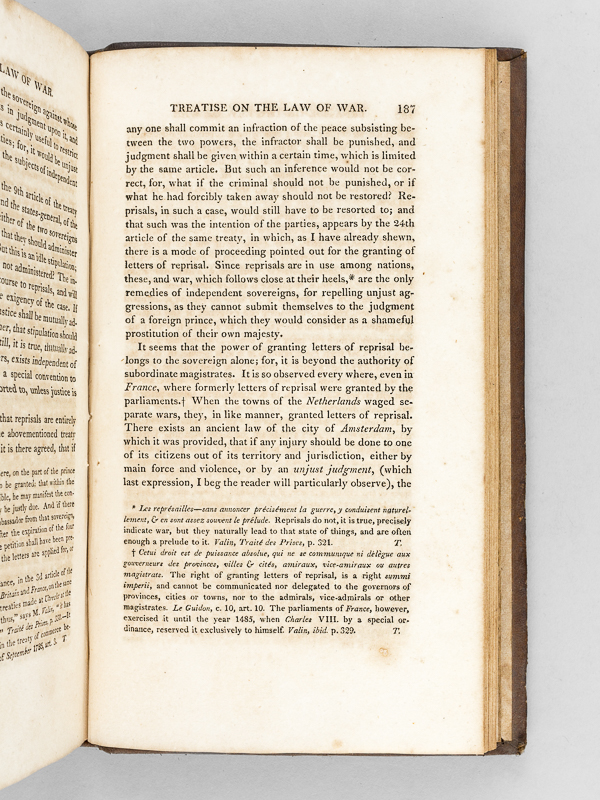 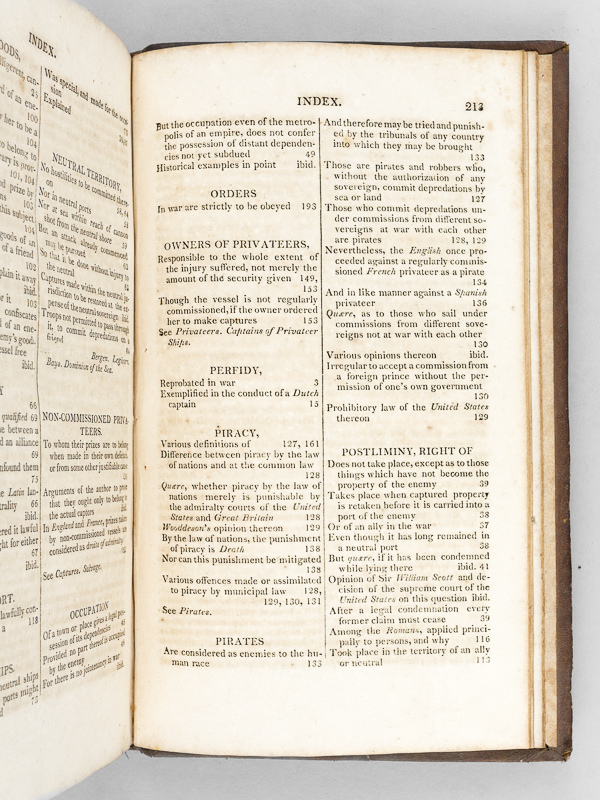 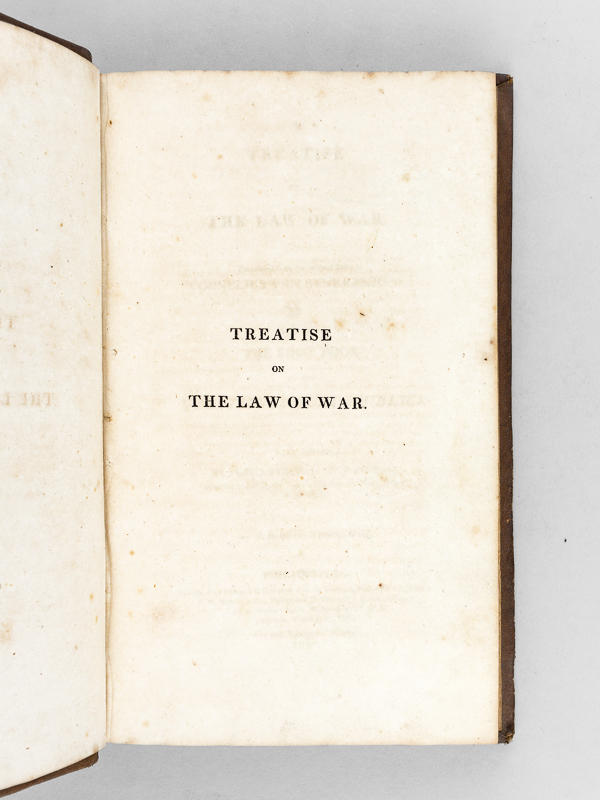 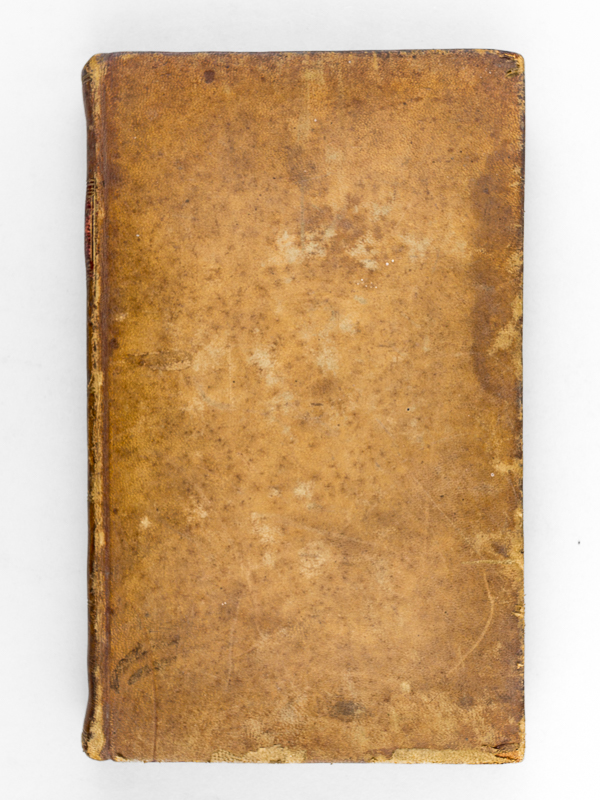 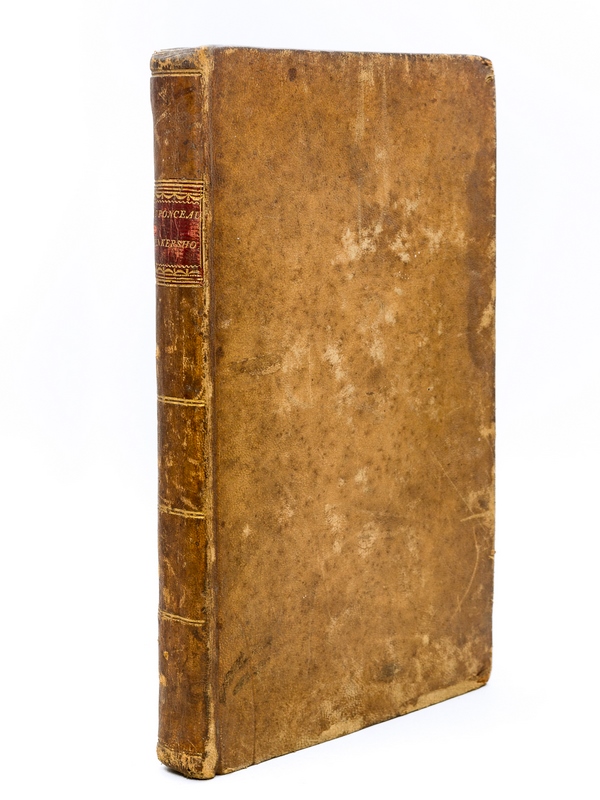 A Treatise on The Law of War, being The First Book of his Quaestiones Juris Publici [ From the library of Caesar Augustus Rodney, US Attorney General]

Translated from the original Latin of Cornelius Van Bynkershoek, 1 vol. 8vo, original full leather binding, Published by Farrand & Nicholas, Philadelphia, also by Farrand, Mallory & co, Boston, P. H. Nicklin & Co, Baltimore, D. Farrand & Green, Albany; Lyman, Mallory & Co, Portland, and Swift & Chipman, Middlebury, Fry and Kammerer, Printers, 1810, 1 f. blanc, 1 f. n. ch., xxxiv-218 pp. , pp. 249-251 (Index from another book) et 1 f. blanc
Commentaire : Very good copy in its contemporary binding (slighlty rubbed, foxing) coming from Caesar Augusts Rodney' library (contemporary signature of C.A. Rodney on title page, and 4 autograph lines written by 'C.A.Rodney A.G.' to 'William Lee'). Caesar Augustus Rodney (1772 - 1824) was an American lawyer and politician from Wilmington, Delaware.Member of the Democratic-Republican Party, he served in the Delaware General Assembly, as well as a U.S. Representative and Senator, and became U.S. Attorney General (A.G.) on January 20, 1807, named by President Thomas Jefferson. Unhappy about being passed over for a U.S. Supreme Court appointment, he resigned on December 1811. During the War of 1812, he was captain of a rifle corps which became the Delaware 1st Artillery then served at Fort Union in Wilmington, on the Canadian frontier, and assisted in the defense of Baltimore in 1814. He was the nephew of Caesar Rodney who was a signer of the Declaration of Independence. This title, translated by Du Ponceau (1760-1844), is important for its insights into the American reception of the civil law in the early 1800s.